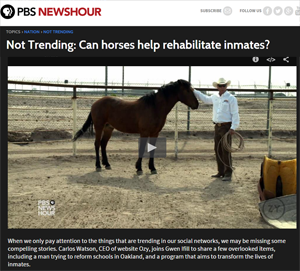 GWEN IFILL: Well, let’s talk about something uplifting, even though it starts in a bad place.

And that’s in a prison in Arizona. And it’s an effort, an interesting effort, and something that certainly isn’t trending, to kind of transform the lives of inmates.

CARLOS WATSON: Very much so.

So, you know today in the U.S., we have got north of two million people in prison. Almost half of them, when they leave prison, end up back in prison within a few years. And so a number of folks have said, is there a different way forward?

And one of them is having some of the prisoners work with wild horses. So, in the West, in places like Arizona, over 40,000 kind of wild mustangs, Bureau of Land Management said, let’s take these horses in. Let’s try and tame them. And in some cases, let’s sell them or give them to others, including even working for the U.S. government.

And now they have got a couple dozen prisoners who are working for four to sixth months at a time day in and day out, not making a lot, but maybe learning a little bit.

GWEN IFILL: Is there any evidence that this kind of effort to deter recidivism actually takes holds, that once they connect with these wild horse, these wild animals, that perhaps they see a different purpose?

CARLOS WATSON: There is.

Before it started in Arizona, you saw it in Colorado. So it’s been around for 20-plus years. And the recidivism rate, the number of people who end up back in jail within three to five years, has been down to 15 percent in some of those cases vs. 50 percent-plus.

So it can have dramatic impacts. Now, this program is new. It’s only been around a year-and-a-half. They’re working with a couple of dozen horses. But one of the things that Randy Helm, the guy who runs it, says is people have to learn that bad decisions are hard and good decisions are easy, and doing that with the horses in some cases, they hope, can teach that to some of the prisoners as well.

GWEN IFILL: On that optimistic note, we’re talking about things Not Trending, as always, with Carlos Watson.

To read the entire interview and view the video please go to Can horses help rehabilitate inmates?