A Great Story About ACI's Partnership with BLM 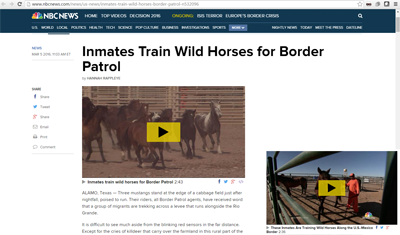 A very nice story aired Saturday, March 5, 2016 on the NBC Nightly News about the wild horse training performed by ADC inmates, under the expert watch of ACI’s WHIP Program under the direction of Randy Helm.

The piece is reported by longtime broadcast journalist, Mark Potter, who retired from NBC on Sunday after 41 years – this was his last story.