In most industries, state-of-the-art manufacturing means increased automation and decreased work force. But for CIs, whose mission is to work more inmates, we need to take a different approach. We need to:

Cultivating a management culture where these three — seemingly opposing — objectives are clearly understood and consistently met is no small feat. However, at Arizona Correctional IndustriesTM (ACI) just such a transformation in the management culture is well under way. 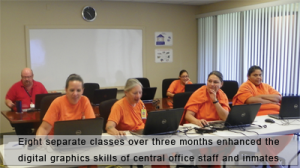 Classes took place on laptops and were facilitated by trainers from Executive Training Solutions in Phoenix. These classes were designed to assist staff and inmates working in the Sublimation and Sales & Marketing departments. Students were encouraged to bring projects and questions they were currently experiencing to better be able to apply the training received. At the conclusion of the classes certificates of completion were offered enhancing the résumés of all participants, staff and inmates alike. Due to the success of this pilot program, more classes are being investigated for training during FY 2015.

ACI central was just one of the ACI Print Shop’s customers who had become much more sophisticated with the types of print-ready digital files they provided. As customers learned new and better graphic design capabilities they expected quicker turnaround times and print quality. In response, the shop management began a program to replace obsolete 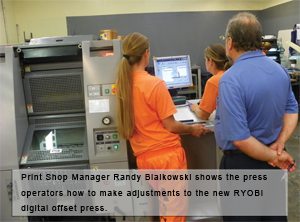 ACI’s fiscal year 2014 Annual Report was one of the first print jobs completed on the new press. From graphic design through the finished report, the inmates and staff involved in the production of the Report learned invaluable new jobs-skills that they will be able to apply throughout their careers. 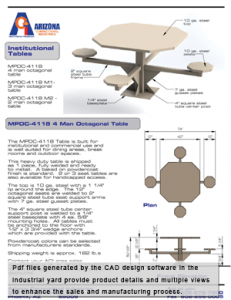 Producing custom-designed office furnishing for other state agencies has been a mainstay of ACI’s business since it was established by the state legislature. But in recent years the competition for this business has become much more competitive. One recent project ACI bid on was lost because a competitor was able to quickly provide full-color renderings of all the offices on entire floor of a downtown high-rise. Each employee could see exactly how their desk, chairs, book cases and filing cabinets would look before the new carpets were laid.

Though ACI has been using CAD programs for years to create detailed, manufacturing drawings for its various shops, these renderings were primarily used only within the shops. But these powerful CAD programs are capable of so much more. From creating catalogs to detailed spec sheets, the inmates and staff have begun to explore the many ways that this software can enhance sales and marketing efforts and keep ACI competitive.

Eventually the output from programs like these will be the equivalent of the digital files used by the print shop today. The inmates and staff using this technology now will be well positioned to work with tomorrow’s 3-D printers.

At ACI, the creation of our various shops was a reaction. DOC needed to reduce its bedding costs, so we began to fabricate bunks and mattresses. The print shop, sign shop, box and trash bag operations and sewing shops were begun the same way. When we could leverage these operations and sell to a broader market they grew and increased their capacity. But many of these shops are now struggling against more efficient and easy-to-use competitors.

In some shops, like printing, it makes sense to invest in the equipment that will keep us competitive, but in others, it just doesn’t make sense. Instead, ACI now proactively searches for new business opportunities to develop more competitive new shops and business partnerships. 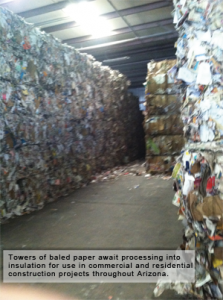 Some areas like recycling began by working with our vendors. By simply asking our supplier whether inmate clothing could replace jean material in our mattress pads, we found a great way to recycle inmate clothing, and reduce our materials costs. From there we began to look at other recycling opportunities with the mattresses themselves and are now recycling the ultra touch cores, the cotton pads and the coil springs. Plastic and cardboard also goes into new products rather than landfills.

With dwindling education funds, ACI is positioning itself as the premier refurbisher of furnishings for classrooms and dorms. A capability that will keep the shops busy and save schools money.

ACI is working with Arizona State University on several recycling projects to help them reach their goal of 0% waste going to landfills. We’ve partnered with a few local businesses to help recycle tons of other materials like cathode ray tubes and polystyrene and we will soon be working with one of the area’s largest paper recyclers.

For several years, ACI has partnered with a company that converts corn into ethanol to help reduce our dependence on oil. In a state where the sun shines 360 day a year, it just makes sense for ACI to partner with businesses developing solar energy solutions. To date we have partnered with two different local companies to provide labor and shipping pallets. Several other partnerships are also being explored.

ACI’s three-dimensional approach to innovation ensures that our shops are using the most up-to-date technologies and software to keep the organization and the staff (inmates and staff) competitive now and in the future. And by actively seeking out business opportunities in growing new industries, we continue creating training and work opportunities for the inmates in our care.