Though the Prison Industry Enhancement Certification Program (PIECP) has been available to correctional industries in one form or another since 1979, few could navigate its many rules and regulations. Administered by the US Office of Justice Programs, Bureau of Justice Assistance (BJA), PIECP certification excepts participating agencies from certain Federal restraints placed on the marketability of prison-made goods by permitting the transport of such goods in interstate commerce and the sale of such goods to the Federal government. 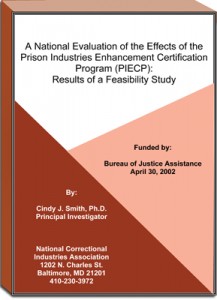 Under BJA’s guidance, correctional agencies can engage in the interstate shipment of prison-made goods for sale on the open market if, and only if:

PIECP is designed to benefit participating departments of correction by providing both a cost-effective prison work program that would offset some of the costs of incarceration, and a prison management tool that reduces institutional violence. Taxpayers benefit as inmates became tax producers, able to provide financial support to victims of crime and their own families. Victims and the families of participating prisoners benefit through direct financial contributions from inmate workers. Private sector companies gain a stable and readily available workforce, and possibly industrial space and training assistance. Inmates themselves benefit by increasing their job skills and experience and thus their prospects for successful transition to a job upon release.